So remember that thing I applied for?

My application was successful.  I was selected to take part in a project at Scotland’s Craft Town,  the wonderful West Kilbride.   I’ve been a massive fan of the Craft Town since I first found out about it a few years ago, so I’m massively chuffed to be a part of it.  The project I’m involved in takes selected craft makers based in Scotland, at various stages of their careers and gives them specialist business mentoring and studio space for six months.   For the first time in over a decade I am being mentored rather than mentoring others, which has been quite a shock to the system.

The first meeting of the participants, organisers and business mentors involved an exercise where we had to think of things that limited our business or things that we were worried about and then we had to decide whether these things were Financial, Operational, Creative, or Emotional. I do these kind of exercises with my students, so I wasn’t too surprised when most of the participants put a whole lot of their worries, fears and anxieties about their work in the Emotional category. I didn’t because as far as I was concerned I’m not caught up in my emotional issues, not me, nuh uh. I am wiser than that.

Later that day I had a one to one meeting with my business mentor, a fabulously astute and direct woman who called me on my bullshit within about twenty minutes.

My mentor asked me to decide how much I hoped to earn in terms of my salary, and to price my work accordingly. I did it the other way around. I worked out how much I wanted to earn from each individual piece (and other stuff that I can’t tell you about yet), then I added up how much I would likely earn over the course of a year and then once I saw the total I decided that it was way too much, that I didn’t need that much and that I didn’t deserve that much, so I’d just have to earn less.

And the worst part was that I didn’t see anything wrong with this. In fact, I thought that earning a good salary for my work was somehow unfair to the rest of the world. So I reduced the price of the thing I can’t tell you about yet and went into my meeting with a nice clear idea of how to avoid earning more than I felt I deserved.

I’m not even joking.

So there we were in our meeting and my mentor patiently listened to my stream of ideas and plans and hopes and fears about where I want to take my work and how I want to develop the business side of things.

Once I’d stopped for breath, my mentor told me that she thought my pricing was too low. I explained that I didn’t think it was. She told me again, that it was indeed way to low, and I explained that pricing it higher wouldn’t be fair to people who wanted to buy it. Then she said something that made absolutely no sense to me. She asked if my feelings about pricing were somehow connected to something within me, or more specifically if my feelings towards the people who buy my work were fulfilling some need within me.

I had absolutely no idea what the hell she was on about. Remember, I teach this stuff. I am a master at pointing out the root of my students’ issues and creative barriers and I could sort of see what she might be getting at and why what she said might have meant something to someone else, but I really had no idea what relevance it had to me.

Until the train ride home.

Here’s what I realised about myself.

I feel bad about people paying for my work because I think that the people who buy and even those who appreciate my work are somehow being duped. I keep feeling that at some point I am going to be found out to be an imposter.  I feel bad when my work is considered valuable.

Issue number one; I do not trust or value my talent.

I worry that I am somehow going to get into trouble for showing off.  I feel that if I openly value my work then people might not like me.

OK, so this is all deep down, little girl fear and anxiety stuff, it’s not up there on the day to day surface of things, but it’s still there, and in my experience the deep down stuff has a way of making itself heard in one insidious way or another.

I see it constantly in my female students. I’m sure men and boys experience it too, I know they do, but in my personal experience it’s women who consistently undervalue their work, their time and their talent and it’s women who desperately seek approval by making themselves small.

I have sat through literally hundreds of student presentations, from high school to post-graduate level and women consistently and persistently do one thing when they present their work, regardless of how good it is or how hard they have worked on it or how good they believe it to be – they apologise for it.

Over and over, throughout my career I have heard women and girls tell me all of the things they should have done differently and all of the ways they could have made their work better and all before they’ve even opened their portfolios or begun their presentation. Even when given positive feedback, they tell you how it should have been better and how it would have been better if only they had done something differently. They deliberately make it less than it is.

So about six years ago, I banned my students from saying the word sorry, and we did a little experiment. They had to present their work without saying a single negative word about it, and throughout the exercise they would have absolutely no encouragement or feedback from me whatsoever. So no negativity from them and no approval from me.

What happened shocked me. Some students weren’t even able to begin speaking. They looked at the floor, they took deep breaths, they took several minutes just to find words to begin with that wouldn’t include any sort of apology. Some were even brought to tears by the sheer frustration of not being able to criticise themselves.

Let me be as clear as possible; speaking about themselves without negativity reduced several women and girls to tears and silence.

And I hadn’t asked them to glow with self congratulation, false pride or confidence, all I had asked them to do was not criticise or apologise for their work.

I ask my students why they feel it’s so difficult to not devalue themselves. Their answers are always, always the same. They tell me that they don’t want other people to think they are arrogant. They worry that if they say their work is good, other people will point out that it’s not. They worry that if they appear to think they are better than others, then those others won’t like them.

Which brings us right back to me on the train.

Up until that point I had subconsciously believed that valuing myself meant devaluing others which would make them feel bad which would make them not like me. I had kept myself in a nice little box that would be no obvious threat to anyone and this deliberate devaluing of myself was making it’s way into my life in my reluctance to make a reasonable amount of money for my work.

The sad thing, the thing that made me furious on the train when all of this hit me, was that I knew, I KNOW that valuing yourself and your talent and your work, truly valuing your best qualities does not bring trouble, criticism and rejection; quite the opposite.

About half way through some of the student presentations something else would happen. After a few minutes of speaking hesitantly, through deep breaths and almost uttered “sorries”, something would shift.

There would come a moment when the student’s voice would even out.

There would be a change in tone and volume that was so moving, so utterly inspiring that I can’t even describe it to you. They would speak without apology, explanation or expectation, about what they loved about their own talent. Then they would realise that no one was laughing at them, no one was horrified, no one had stopped liking them, and that they weren’t in trouble, then their voice would get stronger and clearer and calmer.  And when they shone, something would happen to the other students in the room, and to me;  we’d feel just a little bit closer to our own value because we could see someone else connecting with theirs.

It’s worth pointing out that I have done this same exercise all over the place, with different age groups, different academic levels, different nationalities and the results are pretty consistent. About twenty percent break down in tears, around sixty per cent struggle to speak, about eighty per cent reach a moment when they begin to shine.

I would also like to point out that I would never and could never force anyone to do anything in my class. Everyone who participates does so openly and willingly and the ones who cry are the ones who hammer on through with the greatest determination because they are usually the ones who have the most buried within themselves. Just thought I’d point that out in case you had some sort of image in your head of me inflicting emotional and psychological torture on unsuspecting art students.

I could write forever about why we have all of these layers of apology within ourselves, why we feel we need to be small, to be liked, why we need to undercut our own value to feel comfortable. I won’t though because I’ve got way too much to be getting on with and I’m sure you have your own story to tell about all of the times you insisted on less than you deserved.

So go try this.

Talk to yourself about yourself, your work, your talent, your virtues, whatever you like but do it without apology and do it out loud.

It’s harder than you think.  I struggle with it.

I’ve always imagined that as an artist, I should devalue my work, that it’s up to others to see and judge it’s worth and that if I ask for just a little I won’t be disappointed when I get just a little.  After my meeting with my business mentor though, I realise that I have been seeing myself and my worth in exactly the same self depreciating way my students do.   My ideas about being a struggling artist are really just a reason to keep myself small, unthreatening and likeable.

I’m not going to suddenly increase my prices or change the way I sell my work, but I’m no longer going to limit myself in terms of what I achieve through my work.  I’m not going to prevent myself from earning more than I think I deserve.

From now on, I refuse to reduce my own value.

So I’m not going to make myself small any more.  I’m not going to keep myself in a little box and whatever comes out of me next will come without any apology or fear of what it might achieve. 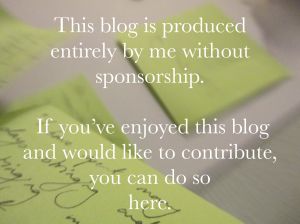